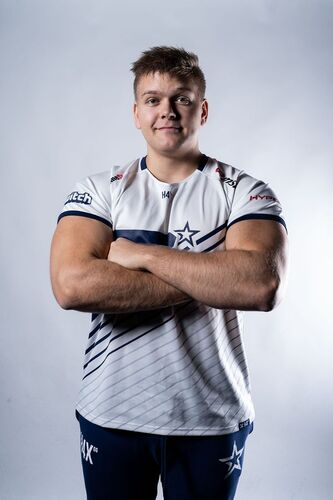 BlameF is an eccentric CS: GO player from Denmark and represents the team ‘Astralis’ he plays as a Rifler. He is only 24 years old and has managed to score a big reputation for himself playing the counter strike global in multiple tournaments and Esports competitions. The current market value of BlameF is reported to be around €951K.

Start of the Career

Like most of the Esports players, Benjamin Bremer AKA BlameF started playing computer games from a young age and slowly transpired his way into the multiplayer world. He used to play League of Legends, World of Warcraft along with many other titles. But then finally he found his passion devoted towards CS: GO offensive and has been playing the game ever since.

He has been part of many CS: GO teams over the years but he started his professional journey with the ‘Great Danes’. He stayed there for a few months and then moved on to join ‘Astralis’ his home team from Denmark. He uses AK47 more often than not and fans claim that it is his favorite weapon too, he has been cordially managing the role of a ‘Rifler’ no matter which team he joins and he is without any doubt pretty good at it.

Even at this point, BlameF has not won any titles in his career that might transpire into a vital achievement of the sorts but he is still young which means that there is still potential and he still might be able to win a few trophies. But that doesn’t mean that he didn’t have any highlights in the past or during his career playing as a CS: GO Rifler because he has had plenty.

For instance, he has secured 1st position in the BLAST Premier: Spring 2020 European Finals and multiple 1st entries in the #HomeSweetHome gaming festival. He has secured 3rd position in BLAST Premier: World Final 2021 and is currently practicing to take part in the upcoming Summer CS: GO offensive tournaments and championships.

He is training hard with the idea of securing the ultimate title of CS: GO champion for himself and his team. Other than that he has already won many awards and a handsome amount of prize money too. Currently, he is practicing with his home team 'Astralis’ and has no heart of leaving the team for some other alternative.

Many fans are interested to find more about the current gaming setup of BlameF and if he is using some out-of-the-ordinary equipment to ace his Rifling skills in the CS: GO. Let’s lift the curtains from this incredibly mysterious setup. He uses BENQ XL2540 as his go-to training monitor, ZOWIE-EC2-C as the mouse.

And for his keyboard, he prefers LOGITECH G512 and MSI GEFORCE RTX 2080 TI (only the best and greatest of the graphics capacity available on the market). He uses LOGITECH G PRO X HEADSET to hear the suppressing sound of the enemies approaching left and right. BlameF has really come a long way since his beginning on this thrilling journey to become an Esports pro and he currently has a lot of road ahead of him to travel on.